For nearly a century most railroads governed the movement of trains by a set of rules known as Time Table & Train Order (TT & TO). In it’s simplest form, it meant that trains ran according to a time table when applicable. But when a train was late, or ran as an extra movement, then its progress was governed by written orders generated by the dispatcher.

If a given order was missed or forgotten, it often resulted in dire consequences. That possibility is addressed in some of the tales in Old Time Railroad Stories. 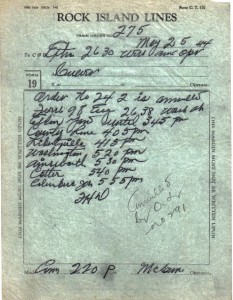 The written train order itself was known as a Form 19 or Form 31 (depending on whether or not the train crew had to stop and sign for the order.) The form was printed on tissue-thin paper so that it could be read at night by holding it in front of a lantern light. The light would shine through it and illuminate the words. Because of the thin paper, a train order was often referred to as a flimsey.

This train order went to the conductor and engineer (C & E) of Rock Island Extra 2630 West. It instructs the crew that the first section of train 98 (an opposing eastbound train) will wait at various locations until a given time.

The TT & TO system is no longer used on the railroads. Flimseys like the one above are now collectors items. They are part of a fascinating hobby known as railroadiana.