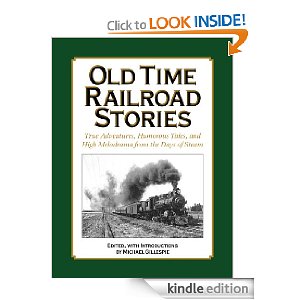 Click on cover image to explore a sample edition ONLINE or to download a sample directly to your Kindle!
In this 340 page collection of old railroading stories, Michael applies his generous wit, dry humor, and historical insights to the school of railroading literature at the height of the steam era … journals, press reports, trade magazines all produced stories meant at the time to entertain readers… but which today offer a compelling folk history from the early days of railroads.

It seems incredible that prior to 1900 most freight trains relied on brakemen to stop or slow down a train. The brakemen would walk the rooftops of the cars–one brakeman moving forward from the caboose, the other making his way back from the engine–and set the handbrakes of each car as they went.

Beginning in 1900, federal law required that a train be equipped with airbrakes on enough cars so that the engineer could stop the train from the cab. But even that was a slow process inasmuch as the earliest type of airbrakes were slow to apply throughout the length of the train. So what could an engineer do in an emergency?

According to the popular press of the day, the engineer would throw the engine into reverse for an emergency stop. But that generally-assumed technique doesn’t jive with the facts.

According to an article written in 1908, any engineer who tried to reverse his engine in an emergency was liable to be fired. The approved way to make an emergency stop is told in the story entitled, “Remarks by the Wife of a Locomotive Engineer,” in Old Time Railroad Stories.

Many of the tales in Old Time Railroad Stories center around the threat of a train wreck. Train wrecks are something that have to be seen to be believed; they are big, messy, and dangerous. But considering all the train wrecks that have taken place over the years, very few are caught on tape or film.

I was much surprised, therefore, when I chanced upon a You Tube video of a train wreck in progress. The train actually was stuck by a tornado, which flipped several of the cars off the track. But what happens next is…well, you’ll just have to see it for yourselves at http://www.youtube.com/watch?v=WADnriWzJes&feature=relmfu
If you can watch this without flinching, then you must have nerves of steel.