I’m often asked what got me interested in trains and railroad history. The fact is that I can’t remember not being interested in them. Certainly, growing up within sight of an active rail line had some part in it. But if I had to point to just one thing, I would say it was a Lionel train set that I got as a Christmas present in 1954. Oh, what an amazing toy that was!

My dad helped me put together the track and attach the transformer. Then we placed the engine and cars on the track and let ‘em rip. Wow! The engine seemed to fairly fly as it tore around the loop, the side rod a-blur as it tried in vain to catch up to the caboose.

As far as I was concerned, there was only one throttle setting–full blast. But the engine, heavy as it was, couldn’t take the curves that fast. So after several re-railings I learned to slow it down a bit. We had placed the track on a linoleum floor, and it tended to scoot around with every circle of the train.

Over the next few Christmases I acquired some accessories to go with the train set. I recall getting a whistle house and a crossing gate and a helicopter that took off from a flatcar. And later still I received a second train set with a figure-eight track. So we mounted both layouts on a sheet of plywood.

Much later, when I had a family of my own, I began working on an HO-scale layout in my home, complete with scenery and buildings and the works. My present layout is my third revision of it. 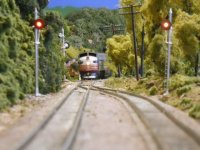 A view of my current model railroad

So what about you? Chances are that you like trains as much as I do. How did you first get interested in them?